We are very excited to announce that Todd Bauchspies will be one of our headlining artists for In The Light! (get your tickets here!) 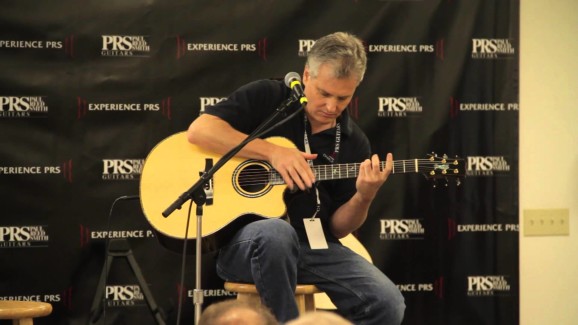 Todd’s guitar playing has been compared to guitarists such as Leo Kottke, Michael Hedges, Al Petteway, and Phil Keaggy. This is no coincidence as each of these players has had a large part in his development as an acoustic guitarist. Todd also credits electric players Steve Morse and Alan Holdsworth as huge influences.

His music has been described as evocative, soothing, spiritual, happy, mournful, and playful. As a PRS Artist, Todd has enjoyed the creativity and freedom in composing and performing original material for large and small crowds alike.

He enjoys sharing stories behind the eclectic titles of his pieces as well as the various tunings and techniques he uses. People of all ages and musical backgrounds enjoy relaxing, listening and watching Todd perform a variety of music which has been influenced by many genres.

On a personal note: CJ Shiloh, our Executive Director at The Musical Autist, has a deep and life-long honor for both Todd and his wife, Cindy, who was CJ’s piano and vocal teacher from elementary through high school. The greatness of not only their musical talents but also their spirituality and strength of marriage has been a profound and continuing influence in her life. If it were not for Cindy and Todd, it’s highly unlikely The Musical Autist would even exist!

Last Main Street Wauchula open mic of the season. Finished it out with a bang @mainstreetwauchula ...

Do you have stage fright? As an autistic musician I struggled with this a lot. Even neurotypical people suffer from stage fright. Learn how to change your mindset and overcome this in our newest blog article. As always...link in bio. ...

NEW blog post about co-songwriting and autism, link in bio. “I can hear it.” He said. And he started playing some chords on his guitar as I shyly sang the melody I had been thinking of. From there we took off! Verse and chorus ideas were flowing. I was contributing even more lines from my book and other new lines right on the spot! We were smiling and laughing and singing. When it came time to write the bridge, the melody and phrasing came up through me and we wrote the lines in minutes! What a beautiful moment in time. #songwriting #songwritingsession #autism #autisticmusician @rebrandingautism @elevatingautisticmusicians @themusicalautist ...

Get to know autistic musician Sunny Ceferatti and Learn more about Relative Pitch vs. Perfect Pitch in our newest blog article! Link in bio.
Photo description: Young Asian woman sitting on a couch chair in front of a fire place. Photo text says- Music has had a positive impact on me. I can’t really articulate the emotions that I feel about when I’m really into a song. My voice gets louder and I guess my emotions would be like passion. And like if the song has really powerful lyrics, yeah. I can connect with them. A quote by Sunny Ceferatti #autism #autisticmusicians #perfectpitch #relativepitch #music #musician @elevatingautisticmusicians @themusicalautist @sunnycefaratti @rebrandingautism ...

Relative Pitch vs. Perfect Pitch- when I was 14 years old, I discovered my ability to play songs by ear. We were visiting my brother at his college, and when we entered one of the buildings and I heard the most beautiful piano music being played. I immediately recognized it as George Winston’s “Joy”. I had always wanted to be able to play his music, but at the time he did not print sheets. So I asked this young man, how did you learn that? And he shrugged his shoulders and said “I just listened to it”. The whole ride home I thought about what he said while listening to GW’s December album on my CD Walkman lol. I said to myself, “I can do that too”. Follow us here and on our website (link in bio) for my upcoming article with the rest of this story. I will also discuss Relative Pitch vs. Perfect Pitch, which one I have, and the differences between them. You can also follow me at @rebrandingautism @georgewinstonpiano #autisticmusician #autismandmusic #perfectpitch ...

An autistic adults thoughts on Sia’s new film ‘music’ which casts a neurotypical actress as an autistic character. Follow our link in bio for the full article. Written by: @rebrandingautism @siamusic #autism @communication_first #autisticmusician @disabilityfilmchallenge ...

🎹🎸🎤🎧A quote from today’s blog post by @rebrandingautism Click link in bio for the full story written by autistic musician, writer and filmmaker Jennifer Msumba. Follow us here for lots more content to come written by and for #autistic musicians! #autisticmusician #autism #autismacceptance #music ...

Jade Excell is a 12 year old autistic student musician from Maryland. She has been studying with Groove Studios - Ukulele , druming and singing in a disability inclusive music program and at the Academy of fine Arts in Gaithersburg, classical piano. She has been playing in talent shows in her school and community for the last 5 years and in 2020 was accepted to be part of the Maryland Fine Arts office yearly Celebration of artists. Jade was accepted into the Middle School Percussion Ensemble at Mason Community Arts Academy, George Mason University in 2019 to play percussion. Jade released 6 cover songs when she was only 8 on Spotify of her favourite songs. She has since learnt by ear her favourite songs from Nickjr, Disneyjr on ukulele and shared those on her instagram @Jadie_autistic_musician and facebook pages- Autismgirlsandmusic. She loves kid music, R& B music and classical music. Jade you rock!! 🎹🥁🎤 #autisticmusician #elevatingautisticmusicians #autism #musician ...

Today we would like to feature Micah @rock_on_micah who is a 19 year old autistic musician. He has had a love for music for many years and he started an all music YouTube channel in June 2020. Together with his dad they are a two man band called The Positive Autism. Micah is on vocals, keyboards and harmonica. His dad plays guitar and bass. They write and produce original songs, covers and even take requests! In November Micah released his first album of original songs called Autism Rocks! I Am Micah on iTunes, Amazon and all the digital platforms. Way to go Micah!! You can also find him on his YouTube channel Autism Rocks- Music by the Positive Autism. Micah thank you so much for sharing your talent and your story with us 😃 #autisticmusician #elevatingautisticmusicians @themusicalautist ...

Want to keep up with everything that's going on at The Musical Autist? Follow us across our Social Networks.